Service Rating
98%
580 reviews
certificate-default
OVERVIEWAUTHENTICITYDELIVERYREVIEWSFAQsPRICE HISTORY
OVERVIEW
This wonderful photo was signed by Michael Vaughan in London on February 28, 2015. It shows Vaughan celebrating with his victorious England team after they won the Ashes back from Australia in 2005. It had been an 18-year wait; not since Mike Gatting's team in 1987 had an England skipper enjoyed similar success. After probably the greatest Test series of all time, Vaughan's men finally triumphed 2-1. The Australians had taken the lead at Lord's, but a thrilling two-run victory at Edgbaston turned the tide back in England's favour, with Geraint Jones taking a leg-side catch off Harmison's bowling to get England back in the series. Andrew Flintoff consoled Brett Lee with a now famous show of sporstmanship. A draw at an electric Old Trafford was followed by an England victory at Trent Bridge, featuring a stunning catch by Andrew Strauss to dismiss Adam Gilchrist. England needed to draw or win in the final test at the Oval, and going into the fifth and final day, the match could still have gone either way. An explosive 156 from Pietersen secured victory for England - and the 2005 Ashes series was won.
AUTHENTICITY 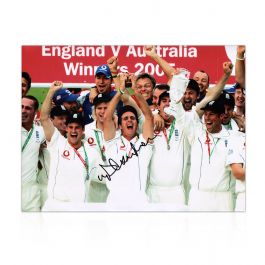