We are very happy to announce that on March 13, 2019 we held a private signing session with Arsenal legend, Dennis Bergkamp! The Exclusive Memorabilia team flew out to Amsterdam to meet with the Non-flying Dutchman and his wife.

Dennis signed a range of Arsenal shirts including original 2005-06 commemorative Highbury shirts and away shirts from the Invincible season. He also signed a range of photos portraying his time at Arsenal and his international career with Holland. A select number of dedications were also made by Dennis to fans who pre-ordered shirts.

The “Iceman” happily chatted with the team about his playing and coaching career. He notably mentioned during the session that he didn’t realise how good his iconic Newcastle goal was until he watched it back on TV later that day. This goal has since been named the Greatest Ever Premier League goal by fans.

Dennis (named after Denis Law by his Dad) was born in Amsterdam on 10th May 1969. He began his playing career at Ajax, when he was spotted by the club at the age of just 11. His professional debut came in 1986 through manager Johan Cruyff, who was Dennis’s childhood hero alongside Glenn Hoddle. In later seasons Dennis became a first-team player for the club, which soon came into great success. The team won the League title in 1990, the UEFA Cup in 1992 and the KNVB Cup in 1993. Bergkamp remained at the club until 1993, in which time he had scored 122 goals in 239 appearances for Ajax. Unsurprisingly, he was named Dutch Footballer of the Year in both 1992 and 1993 whilst being the top scorer in the Eredivisie during this time.

Due to his impressive time at Ajax multiple clubs expressed huge interested in the Dutchman, and in 1993 Inter Milan splashed out £7.1 million to sign him. Dennis wanted the move to Italy as he considered Serie A “the biggest league at the time”. His time at the club was washed with disappointment due to managerial problems, take overs and injuries remaining from the 1994 World Cup.

In June 1995, Bergkamp made the move to England to play for Arsenal FC. His signing fee of £7.5 million broke the clubs record transfer fee, which was set at £2.5 million by Ian Wright (money well spent!). He was a fundamental part of the team who won the domestic league and cup double in 1997, just one season after the appointment of Arsène Wenger. Dennis will always be known by most as being part of the “Invincibles” team in the 2003-04 season. The club became the first English team in over a century to be unbeaten in the entire domestic league season. During his 11 seasons with the club, Dennis made 315 appearances and scored 87 goals.

Dennis began his international career with Holland in 1990, where he came on as a substitute for Frank De Boer against Italy. He played in every game for his country during the 1994 World Cup campaign, where the team were eliminated in the quarter finals by Brazil. Dennis also had a pivotal role during the 1996 Euro Competition and the 1998 World Cup where he scored the memorable last-minute goal against Argentina. He ended his international career after Holland lost out to Italy in the Semi-finals of Euro 2000. He made 79 appearances and scored 37 goals in total for his country.

Dennis is widely regarded as one of the greatest players of his generation. In 2004, Pele selected the Arsenal legend to be part of the FIFA 100 list, which names his 125 greatest living players. He has been described as a “dream for a striker” by previous Arsenal teammate Thierry Henry and “the messiah” by Ian Wright. In February 2014, Arsenal unveiled a statue of Bergkamp outside the Emirates to celebrate his career at the club. 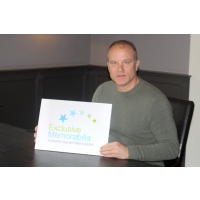