On October 1st, 2020 we held a private signing session with Tottenham Hotspur legend, Glenn Hoddle! The signing took place in Maidenhead, with all COVID safety precautions put into place.

Glenn started his footballing career at the age of 11 years old! Martin Chivers and Ray Evans noticed the potential of Glenn when they came to present prizes at a local school competition. On their recommendation, Glenn was invited to train with Tottenham Hotspur at their training ground. At the age 17, he signed as an apprentice at Spurs.

Glenn made his first team debut in August 1975 against Norwich city, when he came on as a substitute. His first team start came in February 1976 against Stoke City- where he scored the winning goal!

In 1980 Hoddle was awarded the PFA Young Player of the Year award at just 22 years old. That same season he scored 19 goals for the club in 41 league appearances.

Hoddle made his full international debut against Bulgaria on November 22, 1979 during England’s Euro 80 qualifying game. Once again, Glenn impressed by scoring on his first game for his country. He featured prominently in England’s 1980 and 1988 European Championship squads, as well as the 1982 and 1986 World Cup squads. During a nine-year stretch, Glenn scored a total of 8 goals for England in 53 appearances.

Glenn played a pivotal role in both the 1981 FA Cup finals for Spurs. The original game where Tottenham Hotspur contested Manchester City for the trophy, ended as 1-1 after extra-time. The replay took place five days later and Tottenham beat City 3-1.

Glenn played a colossal part in Tottenham’s 1984 UEFA Cup campaign, despite not being able to play in the final due to niggling injuries. He helped the team beat an impressive Feyenoord Rotterdam team (captained by Johan Cruyff) 6-2 on aggregate in the 2nd round.

In his last three seasons with the club, Glenn helped Spurs reach the third place in the First division, the quarter-final of the UEFA Cup in the 1984/85 season and the FA Cup final in 1987.

During his 12 years with the club, Glenn scored a total of 110 goals in 490 first team matches during all competitions.

In 1987, Glenn left Tottenham Hotspur to join AS Monaco. At the time, Arsene Wenger was in charge of the team. Glenn immediately made an impact by helping the club win the 1988 Ligue 1 Championship and was voted the "Best Foreign Player" in French football. Injuries however once again impeded Glenn’s career and in 1990 at the age of 33, Glenn left the club by mutual consent.

In 1991, Glenn joined Swindon Town as a player-manager. In his two years at the club he not only prevented the team from slipping into the Third Division but helped promote Swindon Town to the Premier League. At 36, Glenn was one of the most desired young managers in England and was swiftly snapped up by Chelsea FC. Hoddle led Chelsea to multiple semi-finals and finals during his three years- but could not help the team win anything except the Cup Winners Cup. However, in 1996 Glenn was appointed as England’s latest manager. He guided his country to the second round of the 1998 World Cup but lost out to Argentina on penalties. After his England dismissal he went on to manage Southampton, his former club Tottenham Hotspur, and Wolverhampton Wanderers.

The National Football Museum Hall of Fame cited Glenn as one of the most gifted and creative English footballers of his generation, exhibiting "sublime balance and close control, unrivalled passing and vision and extraordinary shooting ability, both from open play and set pieces".

During our signing session with Glenn he happily signed a range of items that celebrate his incredible footballing career. A few favourites of ours include Tottenham shirts from the 1981 FA Cup and England shirts, which were the style worn in the 1982 World Cup. He also signed three different iconic photos, Tottenham Hotspur footballs, White Hart Lane street signs and black football boots.

You can view the whole signed Glenn Hoddle collection here. 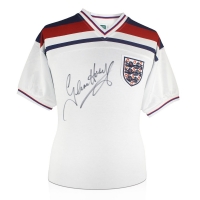 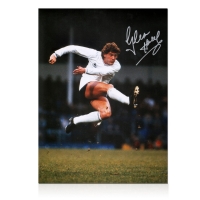 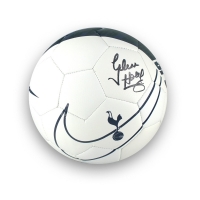 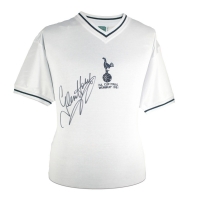 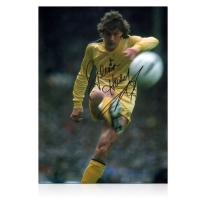