On Andrés Iniesta, and a Career-Defining Goal

Sunday July 11th 2010, in the magnificent Soccer City Stadium, Johannesburg. Andres Iniesta, the spanish magician, watches the clock ticking down, and it seems inevitable that the nineteenth FIFA World Cup would be decided on penalties.

Spain and Holland contested the final and the coaches of both sides were already preparing their strategies for the shootout to come.There were only four minutes left, but as any football fan knows, nothing is definite until that final whistle blows. On this night, a certain Spaniard had other ideas. Once Cesc Fabregas slipped the ball into his feet, there was never any doubt. Andres Iniesta, the majestic Spanish midfielder, was about to score the goal that delivered Spain their first ever World Cup and send the entire nation into a state of euphoria and unbridled joy.

Iniesta's first touch, as ever, was deft. To the untrained eye, it appeared to be a nervous touch. But the man affectionately known in some quarters as El Ilusionista (The Illusionist), knew precisely what he was doing. He teed the ball up perfectly to give himself an opportunity at a half-volley that he was never going to miss. He managed to put just enough side-spin on the ball to evade the desperate last-ditch lunge of Dutch midfielder Rafael Van Der Vaart. His shooting technique, as usual, was exquisite. He drilled the ball immaculately into the left hand corner of the net beyond the reach of the Dutch goalkeeper Maarten Stekelenburg. Goal!

Pandemonium ensued. Iniesta, along with his teammates and the entire nation of Spain, were delirious. The player himself sprinted towards the touchline and ripped his shirt off in celebration as footballers only do in moments of distinct joy such as this one. Every single member of the Spanish team and the substitute bench raced towards him to join in the celebrations. In the stands, the ecstasy was almost palpable among the Spanish fans. The rapture was mirrored across Spain as television channels displayed the joyful reactions of legions of Spanish fans from San Sebastian to Madrid. Hold out for just four or five more minutes, and Spain would be celebrating with the FIFA World Cup Trophy for the very first time.

And hold out they did. Referee Howard Webb blew his whistle in the 121st minute of an enthralling contest and ensured Andres Iniesta would forever be remembered among Spanish football fans as the player who took them to cloud nine with that elusive first World Cup trophy. Spain were the official best team in the World, and it was all down to El Caballero Pálido (The Pale Knight). In some respects, this was the moment that cemented Iniesta's place as one of the best midfielders of all time. He had achieved worldwide recognition for his contributions at club level, helping Barcelona achieve an unprecedented Treble of the Copa Del Rey, La Liga, and Champions League with their scintillating and mesmerizing brand of attacking football. He was also part of the Spain squad that were victorious in the UEFA Euro 2008 tournament. But the very best players tend to score the most important goals. And they do it on the biggest of stages. This was Iniesta's moment. And there is no bigger stage in football than a World Cup final.

You could write a small book on the number of quotes from some of the game's most respected figures hailing Iniesta's qualities. Alex Ferguson summed him up brilliantly when he said that “I don't think Iniesta has ever given the ball away in his life”. His religion is possession football, and giving the ball away is treated with contempt, as if it were a sin. His ball control and balance are utterly incredible, and he almost seems to glide along the pitch when he plays. Iniesta never seems to make the wrong choice with his passing and his peripheral vision when delivering the final ball is unrivaled. He sees passes before anyone present in the stadium or watching at home sees them. All of these qualities fuse together to make the tiny Spaniard stand out as one of the finest midfielders to ever grace a football pitch.

Andres Iniesta is a graduate of the famous Barcelona academy La Masia – the farmhouse that has been the home of some of  football's most gifted players. He is not a Catalonian though, like so many of his peers in La Masia were. He hails from a small village in the Spanish province of Albacete, and he moved to Barcelona as a shy 12 year-old boy. Iniesta's idol was the captain of Barcelona, Pep Guardiola, who would ironically go on to become his manager during the time that he established himself as one of the best playmakers on the planet. There is a great quote about Guardiola's reaction to seeing Iniesta play for the first time. Guardiola was coming to the end of his playing career when Xavi was just starting to make headway into the first team, and Iniesta was captaining the Barcelona Under-15 team. Having seen Iniesta deliver a tournament-winning performance in the 1999 Nike Premier Cup, Guardiola said to Xavi that 'You're going to retire me. This lad [Iniesta] is going to retire us all”. Iniesta had a poster up on his wall at La Masia of Guardiola. Its replacement was a signed photograph from Pep that was dedicated to the best player he had ever seen. Even at this early stage of his career, everyone lucky enough to see him play knew that they were witnessing something special.

Iniesta has delivered some fascinating insight into his own football philosophy, and the wider philosophy of Barcelona. His simple six word summary of the education he received about possession football at La Masia is telling - “Receive, pass, offer, receive, pass offer”.  The statement is metronomic itself, and it points to the tiki-taka style of play that Iniesta and his team mates at club and country level are now synonymous with. Ball retention is everything. This is a personal ideology too. He once described how as a kid  “I always played against much bigger kids and I always wanted the ball. Without it, I feel lost.'. This sums him up perfectly. You can see it when watching him play, he always has his head up and he always seems to be available to receive a pass. A master of  finding space, and a magician in how he uses that space.

One of the reasons that football is such a popular game worldwide is because of its level of unpredictability. It continues to surprise and bewilder with its twists and turns and captures the attention of a global audience. But there was a certain inevitability about Andres Iniesta scoring a goal as important as the one that clinched Spain's first World Cup. Having been named in the team of the tournament in Euro 2008, Iniesta wanted more. He had always been a player to rise to the big occasion, but he had yet to score a truly vital goal in his international career. When the chance presented itself to Iniesta on a mild winter evening in Johannesburg, he grasped it with both hands and buried the ball into the net, sending the nation of Spain into a state of bliss. There was no way he would ever miss.

When he looks back on his career, there is no doubt that the World Cup winning goal will feature somewhere near the top of his highlights in football. With this strike, he even managed to surpass his club team mate Lionel Messi,  who is widely regarded as the greatest player of all time, but is yet to win a World Cup. Much more than this though, Iniesta sent a nation of 45 million people into utter jubilation with his 116th minute strike. And nobody can ever take this moment away from him. Iniesta's joy was further enhanced when he was awarded the man of the match award for his performance in that final against the Netherlands. And make no mistake, it was awarded because of this historic goal. It was the perfect night for a perfect footballer.

Wouldn't it be great to have a piece of memorabilia related to such a defining moment in football history? This photograph captures the very moment that Iniesta slammed the ball home and won Spain their first World Cup. It encapsulates the drama of the moment – the perfect technique from Andres Iniesta, the last-ditch attempt by the defender to block the shot, and the look of fear on the goalkeeper's face as he realizes that the ball is about to fly past him. Best of all, the photograph is signed by the man himself. What better way could one celebrate and commemorate such an important part of football history than buying this picture? If you consider yourself a serious football fan, this piece of memorabilia makes for an essential purchase. It is also a wonderful gift choice for any friend or loved one who enjoys the beautiful game. 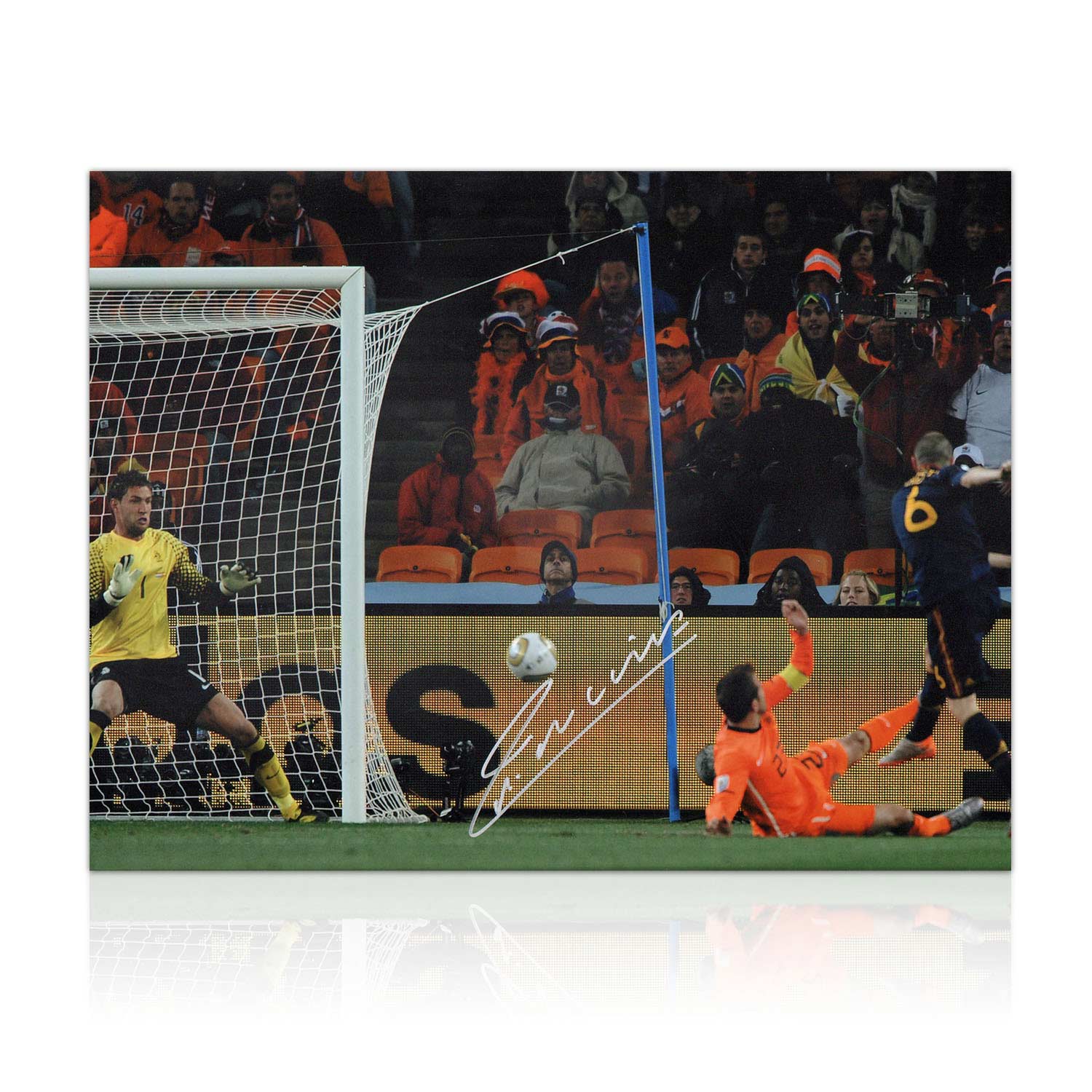