This means that we can offer you signed Barcelona shirts and signed number 10 Brazil shirts from a session organised and conducted by the directors of Exclusive Memorabilia - so for the first time you can buy these products on the Internet with complete confidence.

We also have two styles of signed football boots available - Nike Hypervenoms in his current crimson colourway, and a very limited number of Hypervenoms in gold.

Neymar was in hospitable mood in our visit to Barcelona, first inviting us into his home to meet his father, friends and son, and then completing the signing session in a nearby hotel.

Neymar is pictured below at the signing session with Exclusive Memorabilia directors Tom Rollett and David Holland. 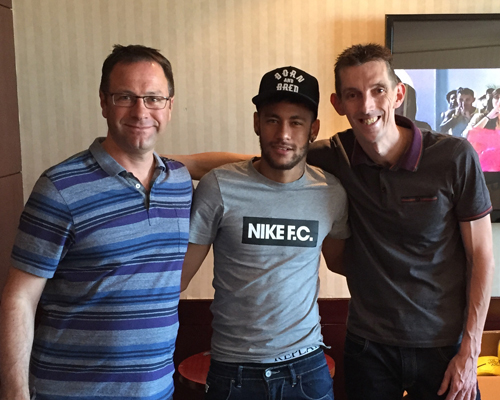