We are delighted to announce that on August 10, Pele completed a signing session for Exclusive Memorabilia. Edson Arantes do Nascimento, to give him his full name, put his autograph to a number of items for EM.

These were the classic 1970s retro Brazil shirt which he signed both on the front and on the back, underneath the number 10 for which he was so famous. He also signed a number of Puma King boots, which were the style of boots he wore throughout his career. We believe that these boots are currently unavailable anywhere else.

The directors of EM have worked with Pele since 2005, and as always, he was pleased to see us and on fine form. The Brazilian legend was in London primarily for the Olympics and he revealed that although he knew he had a role to play in the closing ceremony, he didn't yet know what it would be. It turned out that Pele appeared at the end of the eight-minute segment of Brazilian music - wearing a classic yellow Brazil shirt of course! - that marked the handover from London 2012 to Rio 2016. (See story here)

He we see Pele posing for a picture at the session with David and Katie Holland, two of Exclusive Memorabilia's directors. You can find our selection of Pele memorabilia here. 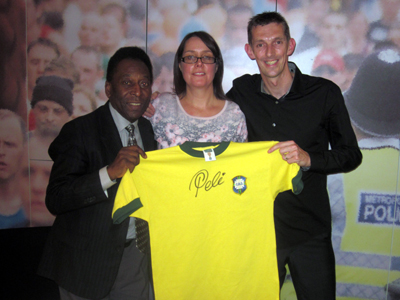