We’re delighted to have agreed an exclusive deal with Robin van Persie for his signed memorabilia. As a result we have completed our first signing with the new Manchester United superstar, and we now have a range of signed shirts, photographs and boots for sale.

Robin was in good spirits when we met him, relaxed and happy to chat about his new life at Man United. He spoke highly of his new team-mates, and seems to have struck up a good friendship with his striking partner Wayne Rooney. But it is Paul Scholes who has impressed him most – his ability to change a game and to play any pass in particular; he even insisted he was a great tackler!

He explained that he was offered the number 20 and number 21 shirts to choose from when he joined the club, as Dimitar Berbatov was still in possession of the number 9, and that having chosen 20 will probably stick with it next season.

He spent a good three hours carefully signing the products and posing for photos. You can choose from Manchester United home shirts, with Premiership or Champions League name and numbering, or signed on the front, or we have a limited edition of 20 white away shirts. This was the style of shirt Robin wore while scoring the winner against Liverpool and scoring a hat-trick against Southampton, two of his early highlights for the Old Trafford club.

For photos you can choose from a fantastic image of Robin on his knees after scoring his first goal for the club with his first shot, or him celebrating after scoring the decisive penalty against Liverpool at Anfield.

We also have adidas predator boots in slime, indigo and blue that he is currently wearing. Robin explained that he was supposed to be wearing a new style of boot this season, but preferred to carry on wearing this style of predator as he prefers to wear a leather boot. 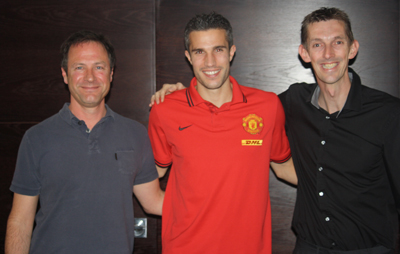