We're delighted to announce that Leigh Halfpenny completed his second signing session for Exclusive Memorabilia in Cardiff yesterday. Leigh's season was ended on Sunday when he dislocated his shoulder making a superb flying tackle in Wales' Six Nations showdown with England. He undergoes surgery today to repair the damage, and we wish him a speedy recovery.

Leigh signed more British Lions shirts and rugby balls, as well as a new range of embroidered rugby boots of the style he wore when kicking the Lions to victory in Australia in 2013. Back in stock are the hugely popular Official British Lions Print: Lions Become Legends - numbers are limited, so don't delay if you're thinking of buying one.

Leigh is pictured below at the signing with Exclusive Memorabilia director David Holland. 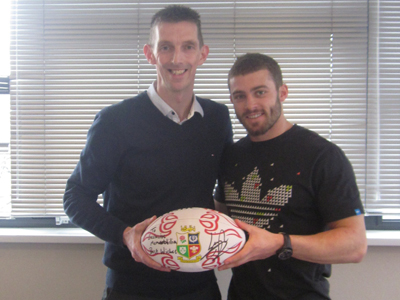