We're delighted to announce that Frank Lampard has completed his first signing session with Exclusive Memorabilia. Frank signed a range of Chelsea shirts, photos, balls and boots for us in London in his first official signing session for six years.

We now have some truly stunning Chelsea memorabilia available, including ultra rare 2012 Champions League shirts signed by both Frank and Didier Drogba.

Frank was on fine form, telling us all about his new series of five children's books on the way as well as details of a new Comic Relief sketch he is working on with David Walliams.

Frank is pictured at the signing session below with Exclusive director David Holland. 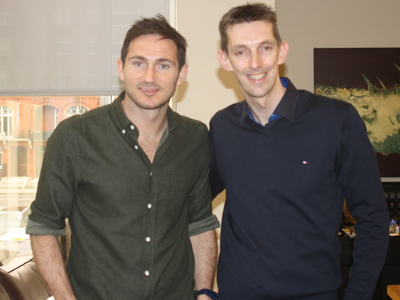