We're delighted to announce that Paul Scholes recently signed a range of shirts, photos, boots and balls for Exclusive Memorabilia.

Shirts from Paul's final season with Manchester United are available, as well as Nike boots of the style worn by him in his last year at Old Trafford, when Scholes won his 11th Premiership title with the club.

We also have two photos available, signed by Paul; the first is a stunning shot of his superb volley against Barcelona in the 2008 Champions League semi-final, the second is a rare twin-signed photo of Paul with fellow United legend Ryan Giggs.

Paul is pictured below with Exclusive Director David Holland. 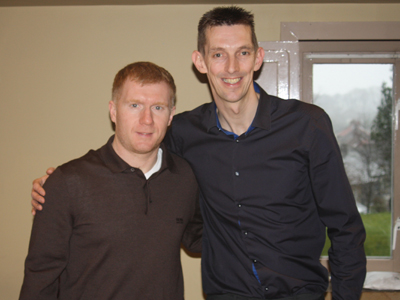