We're delighted to announce that Sir Ian Botham has completed a private signing with Exclusive Memorabilia. Sir Ian put his autograph to a range of products, including photos, mini cricket bats, and cricket shirts.

The ever popular cigar photos are now back in stock, plus we now have a limited edition range of large Miracle Of Headingley prints, numbered from 1 to 149 to celebrate his incredible innings of 149 not out in the 1981 Ashes series.

For the first time we are stocking signed cricket shirts from the great man, including a remake of the blue 1992 World Cup shirts. Click here to view the full range of Ian Botham Memorabilia.

Sir Ian was on great form, having just enjoyed England's narrow victory in the first test against Australia at Trent Bridge. He told us that while staying in Nottingham someone had altered his breakfast order so that every item on the menu was delivered to his room! No-one had confessed, but he suspected it was new Australian coach Darren Lehmann who was behind the prank, judging by Lehmann's big grin when they saw each other in the lobby. He was full of praise for Lehmann's impact on the Aussie side, but he repeated his assertion that England would win all ten tests against Australia this summer and winter. Signing completed, Sir Ian then left to meet his son Liam for a meal to lick off Liam's stag do. 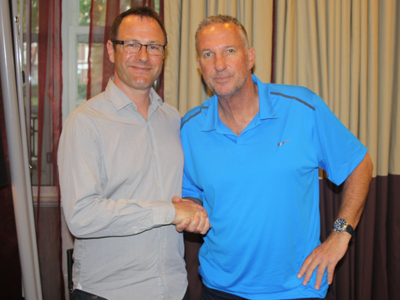